Bitcoin naysayers1 wring their hands over how Bitcoin can't go mainstream. They gleefully worry that Bitcoin will not make it across the innovation chasm:

The response from the Bitcoin community is to either endlessly argue over the above points3 or to find their inner Bitcoin Jonah4 with platitudes like:

The above sophisms are each worth their own article, if just to analyze the psycho-social archetypes of the relevant parrots.

A few of the criticisms mentioned earlier are correct, yet they are complete non sequiturs. Bitcoin will not be eagerly adopted by the mainstream, it will be forced upon them. Forced, as in "compelled by economic reality". People will be forced to pay with bitcoins, not because of 'the technology', but because no one will accept their worthless fiat for payments. Contrary to popular belief, good money drives out bad. This "driving out" has started as a small fiat bleed. It will rapidly escalate into Class IV hemorrhaging due to speculative attacks on weak fiat currencies. The end result will be hyperbitcoinization, i.e. "your money is no good here".

Historically, it has been good, strong currencies that have driven out bad, weak currencies. Over the span of several millennia, strong currencies have dominated and driven out weak in international competition. The Persian daric, the Greek tetradrachma, the Macedonian stater, and the Roman denarius did not become dominant currencies of the ancient world because they were "bad" or "weak." The florins, ducats and sequins of the Italian city-states did not become the "dollars of the Middle Ages" because they were bad coins; they were among the best coins ever made. The pound sterling in the 19th century and the dollar in the 20th century did not become the dominant currencies of their time because they were weak. Consistency, stability and high quality have been the attributes of great currencies that have won the competition for use as international money.

Bitcoins are not just good money, they are the best money.5 The Bitcoin network has the best monetary policy6 and the best brand.7 We should therefore expect that bitcoins will drive out bad, weak currencies.8 By what process will bitcoins become the dominant currency? Which fiat currencies will be the first to disappear? These are the interesting questions of the day, as the necessary premises for these questions are already established truths.9

Bitcoin's current trend is to increase in value on an exponential trend line as new users arrive in waves. The good money is "slowly" driving out the bad. Two factors drive this:

Due to group psychology, these newcomers arrive in waves. The waves have a destabilizing effect on the exchange rate: speculators are unsure of the amplitude or wavelength of adoption, and amateurish punters let their excitement as well as subsequent fear overwhelm them. Regardless, once the tide has pulled back and the weak hands have folded, the price is a few times higher than before the wave. This 'slow' bleed is the current adoption model, and commentators generally assume one of the following:

My own prediction is that slow bleed has been accelerating and is only the first step. The second step will be speculative attacks that use bitcoins as a platform. The third and final step will be hyperbitcoinization.

It might make sense just to get some in case it catches on. If enough people think the same way, that becomes a self fulfilling prophecy. Once it gets bootstrapped, there are so many applications if you could effortlessly pay a few cents to a website as easily as dropping coins in a vending machine.

Slow bleed leads to currency crisis as the expected value of bitcoins solidifies in people's minds. At first they are conservative, they invest "what they can afford to lose". After 12-18 months, their small stash of bitcoins has dramatically increased in value. They see no reason why this long term trend should reverse: the fundamentals have improved and yet adoption remains low. Their confidence increases. They buy more bitcoins. They rationalize: "well, it's only [1-5%] of my investments". They see the price crash a few times, due to bubbles bursting or just garden-variety panic sales – it entices them to buy more, "a bargain". Bitcoin grows on the asset side of their balance sheet.

On the liability side of the Bitcoiner's balance sheet there are mortgages, student loans, car loans, credit cards, etc. Everyone admonishes people to not borrow in order to buy bitcoins. The reality is that money is fungible: if you buy bitcoins instead of paying down your mortgage's principal, you are a leveraged bitcoin investor. Almost everyone is a leveraged bitcoin investor, because it makes economic sense (within reason). The cost of borrowing (annualized interest rates ranging from 0% to 25%) is lower than the expected return of owning bitcoins.

How leveraged someone's balance sheet is depends on the ratio between assets and liabilities. The appeal of leveraging up increases if people believe that fiat-denominated liabilities are going to decrease in real terms, i.e. if they expect inflation to be greater than the interest rate they pay. At that point it becomes a no-brainer to borrow the weak local currency using whatever collateral a bank will accept, invest in a strong foreign currency, and pay back the loan later with realized gains. In this process, banks create more weak currency, amplifying the problem.

The effect of people, businesses, or financial institutions borrowing their local currency to buy bitcoins is that the bitcoin price in that currency would go up relative to other currencies. To illustrate, let's say that middle-class Indians trickle into bitcoin. Thousands of buyers turns into hundreds of thousands of buyers. They borrow Indian Rupees using whatever unencumbered collateral they have – homes, businesses, gold jewelry, etc. They use these Rupees to buy bitcoins. The price of bitcoins in Indian Rupees goes up, a premium develops relative to other currency pairs. A bitcoin in India might be worth $600, while in the U.S. it trades at $500. Traders would buy bitcoins in the U.S. and sell them in India to net a $100 gain. They would then sell their Indian Rupees for dollars. This would weaken the Indian Rupee, causing import inflation and losses for foreign investors. The Indian central bank would have to either increase interest rates to break the cycle, impose capital controls, or spend their foreign currency reserves trying to prop up the Rupee's exchange rate. Only raising interest rates would be a sustainable solution, though it would throw the country into a recession.

There's a huge problem with the Indian central bank raising interest rates: bitcoin's historical return is ~500% per year. Even if investors expected future return is 1/10th of that, the central bank would have to increase interest rates to unconscionable levels to break the attack. The result is evident: everyone would flee the Rupee and adopt bitcoins, due to economic duress rather than technological enlightenment. This example is purely illustrative, it could happen in a small country at first, or it could happen simultaneously around the world. Who leverages their balance sheet and how is impossible to predict, and it will be impossible to stop when the dam cracks.

Which countries are most vulnerable to a currency crisis? Business Insider provides a helpful list here. Bitcoins will have to reach certain threshold of liquidity, indicated by a solid exchange in every financial center and a real money supply – i.e. market cap – of at least $50 billion, before they can be used as an instrument in a speculative attack. This will either coincide with or cause a currency crisis. 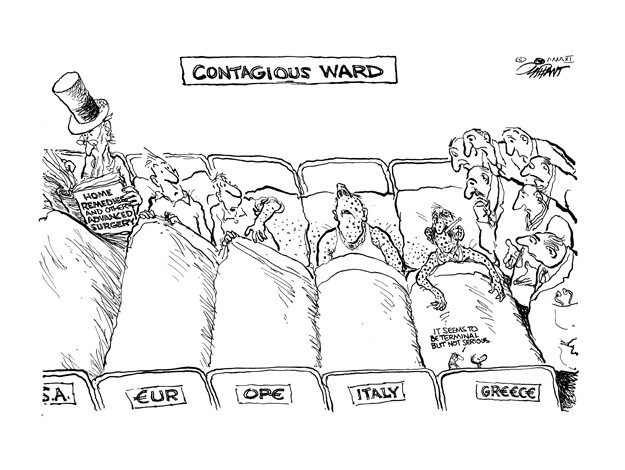 A speculative attack that seems isolated to one or a few weak currencies, but causes the purchasing power of bitcoins to go up dramatically, will rapidly turn into a contagion. For example, the Swiss will see the price of bitcoins go up ten fold, and then a hundred fold. At the margin they will buy bitcoins simply because they want to speculate on their value, not due to an inherent problem with the Swiss Franc. The reflexivity here entails that the reduction in demand for Swiss Francs would actually cause higher than expected inflation and thus an inherent problem with the Swiss Franc. The feedback loop between fiat inflation and bitcoin deflation will throw the world into full hyperbitcoinization, explained by Daniel here.

Bitcoin will become mainstream. The Bitcoin skeptics don't understand this due to their biases and lack of financial knowledge. First, they are in as strong an echo chamber as Bitcoin skeptics.10 They rabidly search for evidence that confirms their view of Bitcoin. Second, they misunderstand how strong currencies like bitcoin overtake weak currencies like the dollar: it is through speculative attacks and currency crises caused by investors, not through the careful evaluation of tech journalists and 'mainstream consumers'. To honor these soon to be extinct skeptics, the Nakamoto Institute has launched A Tribute to Bold Assertions.