Why the Bitcoin Dominance Index is Deceiving

While the scaling debate has been going on for years, more recently, there’s been a lot of complaining and speculation about how Bitcoin will soon lose supremacy as the largest coin and how other coins will eventually take over. In this article, I seek to show how the Bitcoin Dominance Index is inherently deceiving and why there really isn’t a crisis as so many would have us believe.

The Bitcoin Dominance Index was put together a few years ago to show exactly how much of the entire cryptocurrency economy is dominated by Bitcoin. Recently, the Dominance Index has been dropping and many point to the scaling debate within the community as a convenient reason why. 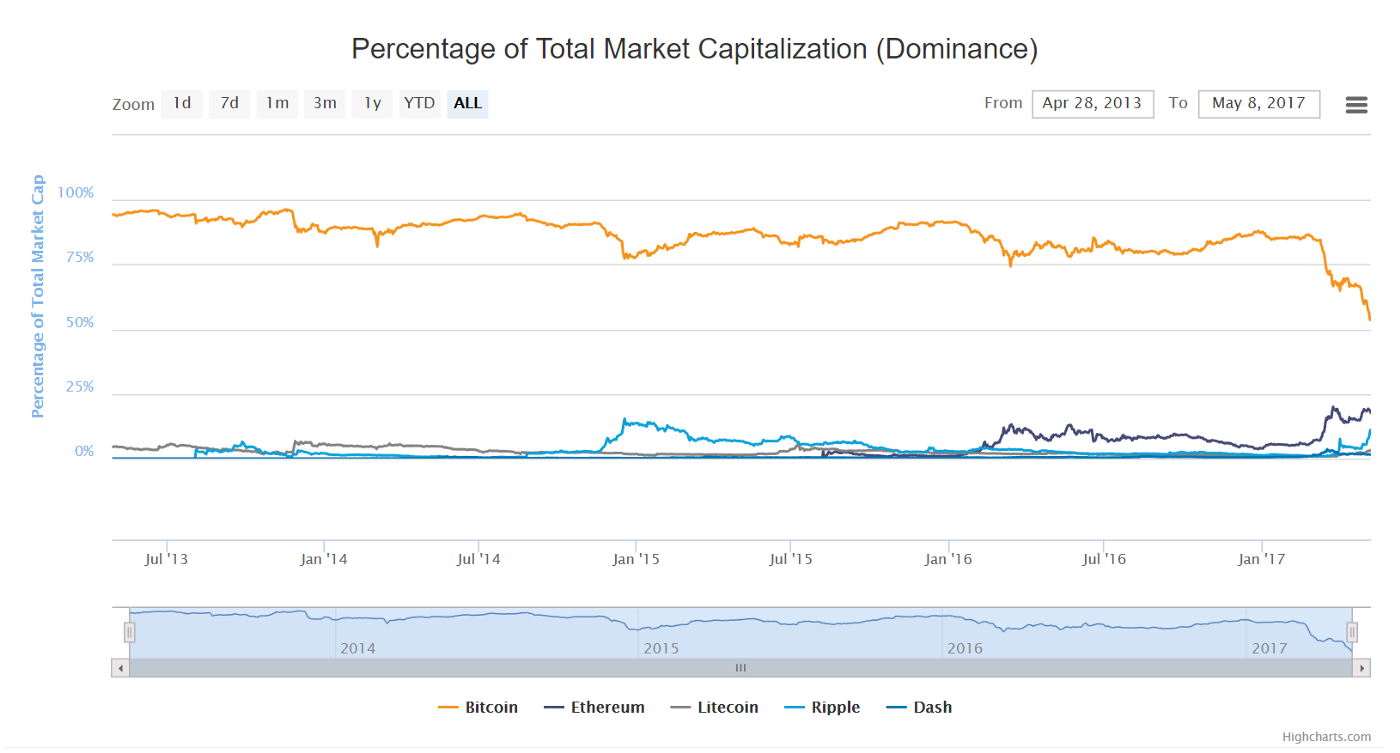 The argument goes something like this. Bitcoin isn’t as useful anymore as the on-chain fees are too high, therefore, people are looking at alternatives to Bitcoin. Thus, value is flowing out of Bitcoin into other currencies and this can be clearly seen in the lack of Bitcoin dominance. Users want new features and they’re going to other coins to get it. If current conditions persist, then Bitcoin will eventually be overtaken by another currency such as Ethereum and Bitcoin will become the MySpace of cryptocurrency.

Essentially, the argument rests on the idea that users are looking to do X with Bitcoin, but can’t and therefore they’re going to other coins in order to be able to do X. X can be buying coffee, utilizing a form of the lightning network, creating a smart contract, engaging in more private transactions, utilizing decentralized apps or some of the many things that other coins are purportedly better at than Bitcoin.

The sentiments of this argument are understandable. People are frustrated with the scaling debate, they don’t like that there’s conflict and would prefer progress, but let’s look at the actual evidence.

First, saying that Bitcoin isn’t useful anymore because fees are too high is like saying that nobody goes to that restaurant anymore because it’s too crowded. Bitcoin is very useful, that’s why people are willing to pay an average of $0.94/tx at the time of this writing to use it. The fact that some people don’t like having to pay high prices doesn’t mean everyone will leave. Some may, but the fee market is self-correcting. If enough people leave, the fees come down, making Bitcoin transactions more attractive.

Second, arguing that value is flowing out of Bitcoin into other currencies would make sense if Bitcoin wasn’t currently near its all-time high. Price going up means that there’s healthy demand for Bitcoin that outstrips supply. The only reason there’s any complaining at all is because Bitcoin isn’t going up as fast as other coins are, but with 500+ altcoins in existence, that’s almost always going to be true of some coin. This is like saying that value is flowing out of Berkshire Hathaway while the price is going up because other stocks are going up even faster. Demand for Bitcoin has very clearly been going up the past year and it’s ridiculous to dispute that because of its slower growth relative to other, much younger and more volatile coins.

Third, the argument that users are going to other coins to take advantage of its features is not really backed up by evidence. How many users buy Ethereum to have enough gas to execute a smart contract vs those that don’t even know how to use a wallet and just keep their balances on exchanges? How many users use Zcash’s privacy features (answer: not many)? Litecoin recently got Segwit and Lightning Network, but how many people have even tried using that vs the people that are buying in anticipation of other people using it? The vast majority of the demand for these coins is speculative based on future usage and very little about current usage.

About the only real current usage would be to make small-ish transactions. And perhaps, for the small portion of transactions that fit in that category, maybe some value has transferred to other coins that offer lower fees. Medium of exchange can be a legitimate reason for someone to switch to another coin, but as I’ve argued before, store of value is the main reason Bitcoin has most of its value and therefore, this isn’t a significant outflow.

Just to be clear, speculating on future utility is a perfectly legitimate form of investment, but let’s not mistake speculation with current utility. Speculation generally has the property that there’s a pretty large risk of failure and very frankly speaking, many of these coins have a lot of risk, specifically of their features not being a great fit for the market at large. 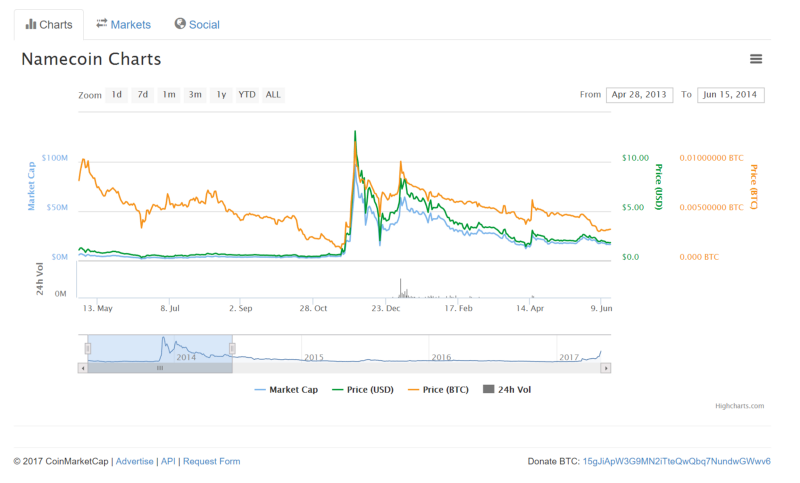 To give just a couple of examples, Namecoin at one point had close to $100M market cap back in 2013 and was at one point thought to be a solution for a decentralized domain name service among other things. Unfortunately, most people found that the idea wasn’t quite as useful as thought and most domains on Namecoin are squatted and very few people use the .bit domain that it provides. 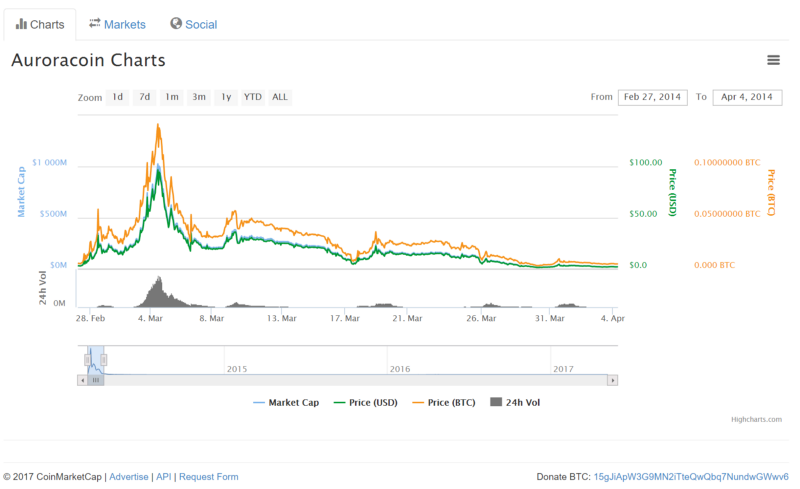 Auroracoin at one point had close to a $1 Billion market cap back in 2014 and was at one point thought to be the digital currency that would be used in Iceland. It turned out that the market cap was largely manipulated by very low liquidity and the coin quickly capsized when more became available.

Many other examples can be seen at Altcoin Obituaries.

This brings me to another point. The market caps on a lot of these altcoins are hugely manipulated. Consider one of the original manipulated altcoins: Ripple. They premined all the coins! That is, they created all Ripples beforehand and only released them to the public a bit at a time.

There’s a huge amount of Ripples that are being held in reserve so that the actual float (that is, amount available to the public to trade) remains relatively small. Many premined coins do the exact same thing to manipulate not just price but their market caps. Only a small portion of the coins actually are traded while a big reserve sits on the side owned by their creators to keep the market cap of the coins high.

This isn’t anything new and in the stock market, stocks that play float manipulation games generally become juicy targets for short-sellers. Altcoins like Gnosis, for example only floated 5% of their coins, so ask yourself, how much of Gnosis’s $115M market cap as of this writing is real?

If that isn’t confusing enough, also consider that many of these altcoins are actually subcoins of Ethereum and much of the market cap may be double-counted.

If that last section was too confusing, consider this thought experiment. Suppose I make a new coin tomorrow called FoolCoin. I premine the whole thing (100,000,000 coins) and only make 10 coins available. Perhaps I create a marketing campaign and even get enough people to desire the coin that Poloniex lists it. I sell just 1 of the coins for $10. FoolCoin now has a $1 Billion market cap. The next coin, I sell for $11 and now FoolCoin has a $1.1 Billion market cap. If there’s enough demand, I eventually end up selling the other 8 coins for $20 each at which point, FoolCoin now has a $2 Billion market cap.

I’ve just added $2 Billion dollars to the cryptocurrency market cap and have reduced Bitcoin dominance by a few percentage points. But did I really take anything out of bitcoin other than perhaps a few hundred dollars worth?

The scenario I’ve laid out for FoolCoin doesn’t even assume the more sinister manipulation activities like wash trading, pump and dump, etc. Even without resorting to those, it’s relatively easy to add a lot of market cap to the cryptocurrency index to make Bitcoin look much less dominant.

First, Bitcoin is very healthy. Healthier than ever in terms of price, market cap, usage, censorship resistance and pretty much every metric utility-wise. To say otherwise is to ignore the market signals.

Second, altcoins are themselves getting a lot of investment, but that doesn’t necessarily mean that people are using them for their current utility. In fact, a lot of the price increase for altcoins looks like speculation on future utility, not current utility.

Third, market caps of many altcoins are seriously manipulated. Many have ultra-low liquidity and actually don’t have that much money invested in them, despite the large market cap. These altcoins aren’t taking anything away from Bitcoin as much as they are pumping themselves up.

Like with most things, Bitcoin Dominance is a very crude metric and one that’s unfortunately very easy to manipulate. The recent enthusiasm for ICOs has made the manipulation even worse and continues to hide the fact that Bitcoin is doing really well. As the manipulation gets more and more obvious, expect this metric to be replaced by something more useful.

Thanks to Aaron Caswell.