Out of the Memory Hole

I wrote an article a couple years ago called “Who Controls Bitcoin?” which argues that it is not the miners or the core devs who control Bitcoin; rather, it is the investors. Recently, a fork occurred in the Ethereum blockchain which is illustrating my point. In response to the exploit of the DAO, The Ethereum devs instituted a hard fork (ETH) which re-wrote history so that the exploit never happened. However, those who reject the idea that Ethereum’s blockchain can be retroactively altered at the whims of a governing body have rejected the hard fork. Ethereum’s original chain is now called Ethereum Classic. I hope I can finish writing this article before ETC sucks all value out of ETH! This article is about why such an event is possible and how the choice between ETH and ETC is different from that between Bitcoin and an altcoin.

My interpretation of this event is that Ethereum was billed as a distributed system and the DAO as a legally binding contract1 written in code, and this is what the investors wanted when they bought into it. The idea that the Ethereum developers can just rewrite history whenever they please completely negates this purpose and clearly demonstrates Ethereum to be a sham. However, investors don’t have to let Ethereum be a sham because they are ultimately the ones in control. All they have to do is take a little risk and sell some ETH for ETC. If enough of them do this, then ETC will become the established chain.

I’m very excited about ETC. If ETC wins, then not only will my favorite hacker get to keep his legally acquired money, but Ethereum will have shown itself to be a truly censorship-resistant system.

In fact, I’m so excited that I actually bought some ETC recently. This is the first time I have ever bought an altcoin. Kind of ridiculous since I just wrote an article called “Ethereum is Doomed”, so feel free to make fun of me (as if I could stop anyone). However, I am not making a bet that Ethereum will ultimately win. I am making a bet that ETC will beat ETH. I still think that it will be years before nontrivial smart contracts will be reliable enough as to be safe to use and that there is a real risk the money won’t hold out long enough for it to happen. But this is such an unusual opportunity that there might never be another one like it. No one will try to do anything quite as stupid as the Ethereum devs again, so there will not likely be such an obvious choice in the future. That this is a kind of event that has not happened yet, but which I have been imagining for some time. If there were ever a time and place for me to be less confused than everyone else, it would be this.2

The Risk of Investing in a New Currency

A business can be a good investment even if its stock price does not go up. If it is viable, it may eventually pay out dividends, and if it grows, it will increase its assets. If other people are stupid enough not to notice, what of it? The business owners are in fact wealthier. One might even prefer its price to stay low or even go down so that one can buy more. Of course, that is a vain hope in the long run because if it pays out at a better rate than other businesses, than other investors will buy it until its dividend yield is similar to the rest of the economy.

By contrast, currencies have no yield and do not grant the holder rights over a productive asset. Consequently, the only way to grow wealthier off a currency is if other people actually do bid up the price. Investors in a currency, therefore, must contend with a risk that is independent of the intrinsic merits of that currency. They must risk the possibility that other people will be too timid to follow them. The first person who invests in B risks the possibility that no one is willing to be the second person; the second person risks that no one is willing to be the third; and so on. If this process fails then currency B will turn out to be nothing but hype. If it succeeds, then currency A will become a dead tradition.

Currency B could be objectively superior to currency A, but it would still fail if not enough people take a chance on it. The first person might realize that currency B would be better if it were to take over, but if he knows that there is no second person around who will be able to convince himself that a third person will follow, then he might as well not bother investing in currency B at all. See “It’s Not About the Technology, It’s About the Money” for a much more in-depth discussion of the risks of investing in a new currency.

The Difference Between an Altcoin and a Fork

In the previous section, I described the transition from one currency to another as an unbroken chain of investors starting with the most visionary down to the last few people scrambling to get some value out of the old currency before it fails completely. The risk of investing in a new currency is that there might not be a chain like that. Maybe you buy a new currency, and then a few more people buy it after you… and then nothing. Early on, that’s a big risk because it’s hard to predict what people will do. Later on, it’s less of a risk because it will be obvious that the old currency is rapidly losing value.

There is a similar risk in investing in a fork of a new currency, but it’s much much less severe. There still has to be a future chain of investment to make a new fork win over an old, but it does not have to include everybody. The difference is that when the new chain is created, everyone who owned the currency beforehand automatically has units from both chains. Because everyone is automatically hedged between the forks, most currency holders do not have to take any action or even realize that anything is going on in order for one chain to win over another. The actions of a few investors can cause one fork to win over the other. People can choose to pass without affecting the outcome. If they just keep their ethers and don’t do anything, they will eventually have all their value stored in whichever fork wins.

Consequently, the competition between two forks of the same currency is much more about their intrinsic merits than about worrying what everyone else is doing. I have often told people that an altcoin cannot defeat Bitcoin by making incremental improvements to it; it can only do this by being as great an improvement over Bitcoin as Bitcoin is over the dollar. Because there is less inherent risk in investing in a fork rather than in a new currency, a fork can succeed more easily by making incremental improvements.3

It is helpful to think of Ethereum as being both ETH and ETC together rather than to think of ETC as an alternate to ETH. Speaking of that, I have a customer suggestion for Poloniex: it should be possible to display charts in terms of ETH + ETC (or more generally as a sum of all the chains of a given currency being traded). Ethereum should be seen as both ETH and ETC together, and they should not be seen as separate currencies.

Why ETC is Better

Had the attacker lost money by mistake, I am sure the devs would have had no difficulty appropriating his funds and saying “this is what happens in the brave new world of programmatic money flows.”

In other words, if the developers have the ability rewrite history in order to fix bugs in any random script that someone uploads, then they have a level of discretion over what Ethereum does. For any bug that might happen in the future, they might well give many reasons not to fix it. They might say that it is not severe enough to risk a hard fork. They might say that it is not their responsibility to patch up every contract that was written incorrectly. Or they might be nice and agree to rewrite history for someone important enough. It is also not always objective that any behavior which a program exhibits actually is a bug. If the developers could have provided plausible arguments either way, then they can manipulate the system to their own benefit.

I am not arguing that there is a “slippery slope” from Ethereum to a some kind of feudal manor lorded over by Vitalik Buterin. I think that any level of discretion on the part of the devs weakens Ethereum as a platform, and therefore an investor who wants to make the most money would prefer to reject it completely. If the developers have the opportunity to identify undesired behavior in a program and revert it at their discretion then they can invest in anything they like, and then find a bug in it and revert history if the investment doesn’t work out. I’m not saying this has happened, just that you shouldn’t design systems which are open to abuse.

Those who have chosen ETC have chosen abstract rules over arbitrary interventions. They have said that the developers will be designers, not rulers. This is a choice that I respect. Furthermore, if ETC succeeds, the initial investors in it today will become disproportionately influential over it as it grows. Therefore, the intelligence which characterized its inception will continue to influence its evolution in the future. I would then have to consider it the strongest Bitcoin competitor yet. 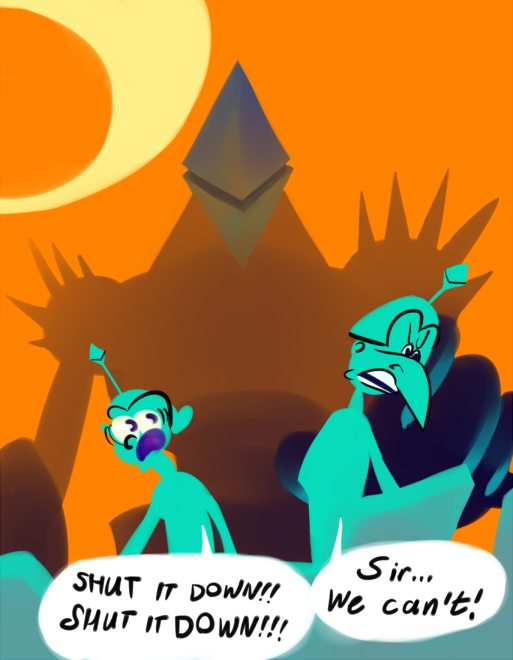 Artwork by the author.

I would really like to see ETC succeed because I think that today many people think of the idea of a network fork as a very scary and destructive idea, whereas I think that enabling people to create forks and trade between them would be a much more effective way to promote the health of Bitcoin than the way we do it today. I think that many people see the creation of ETC is an underhanded and destructive tactic, whereas I would like it to be seen as a reasonable and respectable thing for unsatisfied investors to do. I would like the early investors in ETC to make money because then people would want to imitate them.

If it became easier for people to trade different forks of the same currency, then investors could get direct experience with different ideas without endangering the network. They furthermore have a direct means of promoting the upgrades they like without having to lobby. A market would allow for a smooth transition from one set of rules to another. Instead of some single discrete block in which the whole network upgrades, the composition of our balances by value shifts from one in which the new fork has almost none to one in which it is nearly all.5

The process will tend to benefit the Bitcoin network because investors will gain the most by promoting growth the most. Furthermore, anyone who attempted to subvert Bitcoin would tend to lose money.