How We Know Bitcoin Is Not a Bubble

The Value of Money

No matter how many times Bitcoin grows by orders of magnitude, holdouts still remain who argue that it is a bubble destined to fail. To address this claim, I will describe a theory that describes how to appraise Bitcoin according to the Austrian theory of money.

In Austrian economics, money is valuable because it is liquid. This means that a given value of money is demanded everywhere and can easily be traded for goods. For example, say I had enough bitcoins to buy a 100-oz gold bar. In late 2010, this would have been worth around one to two million bitcoins and would have been impossible to sell on the open market without drastically affecting the price. By contrast, in early 2014, 100 ounces of gold was worth about 100 bitcoins, and this amount could easily have been traded quickly on one of the major exchanges without affecting the price noticeably. Thus, in early 2014 Bitcoin was more liquid than in late 2010, and was therefore a better currency.

Unfortunately, this insight about the value of money does not give us a means of appraising it because the liquidity cannot be separated from the price. This is kind of a problem—it sounds like a circular argument because it says that Bitcoin’s value is caused by its price! This allows for no way to detect whether Bitcoin is overvalued or undervalued.

In order to prevent this model from being causally circular, a time element is required. Our observations about money come from the past, whereas our judgments about its value are about the immediate future. This makes the value of money into a positive feedback loop. If the network is growing, then it will tend to continue to grow, whereas if it is shrinking, it will tend to continue to shrink.

This model of money has no independent quantity that estimates anything like an underlying value. Any price is as good as any other—the only thing that matters is the direction it is moving. This is not really an appraisal after all—but it is still the right way to understand Bitcoin’s price.

In the short term, there is money to be made by buying anything whose price is showing an upward trend if one spots the trend early enough. In other words, if one can predict that other people are likely to appraise a good more highly in the future, regardless of whether that appraisal is rational or irrational, then it makes sense to buy into the change of sentiment. If lots of people begin to think this way, then they can create a positive feedback among one another and bid up the good beyond any rational appraisal of it. This is a bubble.

A bubble bursts because eventually people have to get around to using a good for its ultimate purpose. Once it is understood that the people who actually use the good are being bid out of the market, then the price crashes because people stop predicting higher and higher appraisals to the price.

Money, however, need not have any ultimate use. It may only ever passed around from person to person, without ever being consumed. A stock is valued by the sum of its interest-adjusted dividends. A bond is valued by its redemption value adjusted by the interest rate and the risk of default. A commodity is valued by the value of the goods it can be used to produce. However, for money, there is no independent quantity to provide a reality check. All money is like a bubble that never bursts.1

Some of the theory of money can be understood in terms of Metcalfe’s law from computer networking. Metcalfe’s law says that the value of a network is proportional to the square of the number of nodes. The rationale is that the network should be valued according to the number of connections it supports, which is approximately proportional to n_2 (for large _n). Consequently, as the network grows, it presents a better and better opportunity for new members. As new members enter, the network improves for all its present members.

Metcalfe’s law must be adjusted slightly to apply to media of exchange because some nodes in the trade network will be more valuable than others. Those who have a lot of the medium are potentially able to spend more than those who have little. Therefore, use the market cap of the medium of exchange as n instead of the number of people. Similarly, some transactions are also worth more than others, so it makes sense to use the transaction volume rather than the number of transactions.

A striking test of Metcalfe’s law in Bitcoin recently appeared on the Bitcointalk forums, created by Peter R. I have made my own chart here. 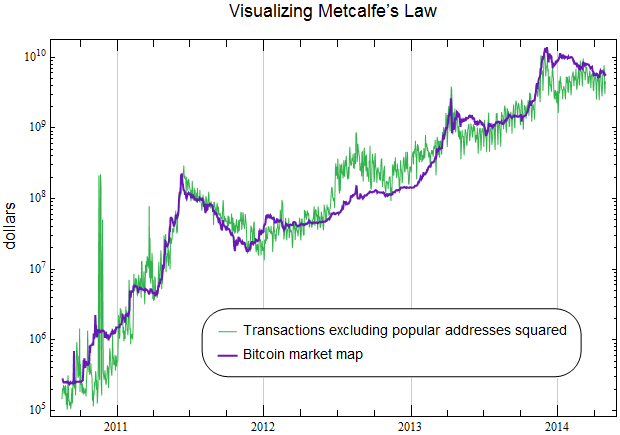 I would like, however, to criticize the interpretation of the diagram. On the original Bitcoin Talk, thread, the green plot has been labeled as the “Metcalfe Value”, as if it is an appraisal of the Bitcoin that estimates what it could cost.

This may seem like hair-splitting, but a confusion of cause and effect can have serious consequences. For example, many people believe that it is necessary to spend bitcoins and increase the transaction volume in order to make Bitcoin more valuable. Of course this is nonsense; all this does is fill up the network with transactions for things that nobody actually wanted. That does not present a good value for a newcomer because he will want a network that presents him with real opportunities, not just ways of artificially increasing transaction volume. The more that the Bitcoin network is focused on artificially increasing the transaction volume to make it look good, the more it resembles a Ponzi scheme. Rather, to make the network more valuable, we should be hoarders. This is more likely to present newcomers with lots of potential uses for Bitcoin as a medium of exchange.

A real good can be valuable because of the ways that it can be consumed or because of the trades that can be made with it. Mises called these causes of value "use value" and "exchange value". Gold, for example, can be money and used as components in electronics. Evaluating whether a good is a bubble or not requires taking both factors into account; it is not enough observe that the price of a is far greater than can be explained by its use value to conclude that it is a bubble.

To put this another way, suppose that gold was only used in electronics. If that were the case, its price should be expected to be much less than it is now. However, some people started holding gold for longer periods of time before producing anything with it. This would cause the price of gold to go up, which would therefore make gold less useful as an electronics component. However, it would also make gold more useful as a medium of exchange. If gold's improved exchange value was enough to induce more people to buy it despite its reduced use value, then the price of gold could sustainably continue upwards. Its price chart might look like a bubble, but without the expectation of an imminent crash.

This brings us to Bitcoin. To what extent is Bitcoin's price a rational appraisal or an investment bubble? The answer is easy, much easier than with a commodity like gold. Bitcoins have almost no use other than as a medium of exchange. Thus, the fact Bitcoin has any price at all is evidence that there is a real network effect and that the cause of its price is its exchange value. With gold one has to consider the interplay between its use and exchange value, but with Bitcoin there is no such confusion:

Thus, Bitcoin is not a bubble, or at least the available evidence strongly suggests that it is not. Its growth is like a self-fulfilling prophecy: as more people believe in it as a medium of exchange and become willing to buy it, they create the very conditions required of it to make it more useful.

Every time you buy Bitcoin, a fairy gets its wings. Now clap your hands, click your heels together three times, and believe in Bitcoin! It will only take faith the size of a mustard seed.