As kids, we all learn that money doesn’t grow on trees. As a society on the other hand, we have become conditioned to believe that it’s not only possible but that it’s a normal, necessary and productive function of our economy. Before bitcoin, this privilege was reserved to global central banks (see here for example). Post bitcoin, every Tom, Dick & Harry seems to think that they can create money too. At a root level, this is the audacity of everyone that attempts to create a copy of bitcoin. Whether by hard-forking out of consensus (bitcoin cash), cloning bitcoin (litecoin) or creating a new protocol with “better” features (ethereum), each is an attempt to create a new form of money. If bitcoin could do it, why can’t we?

We sit here, in 2019, witnessing the monetization event of an economic good (bitcoin) on the free market for the first time in thousands of years (h/t gold). Rather than stopping to contemplate the weight of that reality or to understand how or why that is possible, many people skip right past it to focus on some derivative or some way to improve upon a problem they didn’t see in the first place. Everyone wants to get rich quick, and so long as there is money, there will also be alchemists. Those that attempt to copy bitcoin are our modern day alchemists.

If an asset’s primary (if not sole) utility is the exchange for other goods and services and if it does not have a claim on the income stream of a productive asset (such as a stock or bond), it must compete as a form of money and will only store value if it possesses credible monetary properties. With each “feature” change, those that attempt to copy bitcoin signal a failure to understand the properties that make bitcoin valuable or viable as money. When bitcoin’s software code was released, it wasn’t money. To this day, bitcoin’s software code is not money. You can copy the code tomorrow or create your own variant with a new feature and no one that has adopted bitcoin as money will treat it as such. Bitcoin has become money over time only as the bitcoin network developed emergent properties that did not exist at inception and which are next to impossible to replicate now that bitcoin exists.

These properties emerged organically and spontaneously as individual economic actors all over the world evaluated bitcoin and determined to store a portion of their wealth in it. As bitcoin’s value increased, it became decentralized and as it became decentralized, it also became increasingly difficult to alter the network’s consensus rules or to invalidate, or prevent, otherwise valid transactions (often referred to as censorship-resistance). There remains reasonable debate as to whether bitcoin is sufficiently decentralized or sufficiently censorship-resistant, but while this may be the case, there are other considerations less subject to debate:

Monetary Systems Tend to One

Every other fiat currency, commodity money or cryptocurrency is competing for the exact same use case as bitcoin whether it is understood or not and monetary systems tend to a single medium because their utility is liquidity rather than consumption or production. When evaluating monetary networks, it would be irrational to store value in a smaller, less liquid and less secure network if a larger, more liquid and more secure network existed as an attainable option.

Apply a common sense test. If you worked for two weeks and your employer offered to pay you in a form of currency accepted by 1 billion people all over the world or a currency accepted by 1 million people, which would you take? Would you request 99.9% of one and 0.1% of the other, or would you take your chances with your billion friends? If you are a U.S. resident but travel to Europe one week a year, do you request your employer pay you 1/52nd in euros each week or do you take your chances with dollars? The practical reality is that almost all individuals store value in a single monetary asset, not because others do not exist but rather because it is the most liquid asset within their market economy.

Anyone with Venezuelan bolivars or Argentine pesos would opt into the dollar system if they could. And similarly, anyone choosing to speculate in a copy of bitcoin is making the irrational decision to voluntarily opt-in to a less liquid, less secure monetary network. While certain monetary networks are larger and more liquid than bitcoin today (e.g. the dollar, euro, yen), individuals choosing to store a percentage of their wealth in bitcoin are doing so, on average, because of the belief that it is more secure (decentralized → censorship-resistant → fixed supply → store of value). And, because of the expectation that others (e.g. a billion soon-to-be friends) will also opt-in, increasing liquidity and trading partners.

Why Bitcoin Can’t Be Copied

Many individuals creating digital currencies neither accept or admit that what they are creating has to be money to succeed; others that are speculating in these assets fail to understand that monetary systems tend to one medium or naively believe that their currency can out-compete bitcoin. None of them can explain how their digital currency of choice becomes more decentralized, more censorship-resistant or develops more liquidity than bitcoin. To take that further, no other digital currency will likely ever achieve the minimum level of decentralization or censorship-resistance required to have a credibly enforced monetary policy. And to literally steal a page from The Bitcoin Standard: 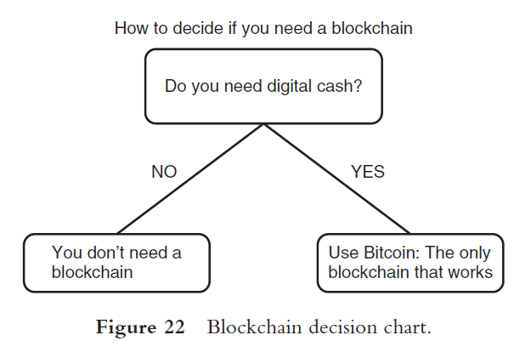 Bitcoin is valuable, not because of a particular feature, but instead, because it achieved finite, digital scarcity, through which it derives its store of value property. The credibility of bitcoin’s scarcity (and monetary policy) only exists because it is decentralized and censorship-resistant, which in itself has very little to do with software. In aggregate, this drives incremental adoption and liquidity which reinforces and strengthens the value of the bitcoin network. As part of this process, individuals are, at the same time, opting out of inferior monetary networks. This is fundamentally why the emergent properties in bitcoin are next to impossible to replicate and why bitcoin cannot be copied or out-competed: because bitcoin already exists as an option and its monetary properties become stronger over time (and with greater scale), while also at the direct expense of inferior monetary networks.

One would likely never come to this conclusion without first developing their own understanding of the following: i) that bitcoin is finitely scarce (how/why); ii) that bitcoin is valuable because it is scarce; and iii) that monetary networks tend to one medium. You may come to different conclusions, but this is the appropriate framework to consider when contemplating whether it is possible to copy (or out-compete) bitcoin rather than a framework based on any particular feature set. It’s also important to recognize that any individual’s conclusions, including your own or my own, has very little bearing in the equation. Instead, what matters is what the market consensus believes and what it converges on as the most credible long-term store of value.

The empirical evidence (price mechanism & value) demonstrates that the market continues to determine why bitcoin is different, despite a significant amount of noise. Before speculating, try to understand why bitcoin works and why it’s unique. When someone inevitably tells you about a better bitcoin or some differentiating feature, remember that the market, which has come to this same crossroad over the last decade before you, has considered those trade-offs and chosen bitcoin over the field for very rational reasons.

Nassim Taleb writes about how a very small intransigent minority can force its preference on the majority, referring to it as the minority rule and explaining why “The Most Intolerant Wins”. Bitcoin (and monetary systems) are a perfect example of this phenomenon. If a very small minority converges on the belief that bitcoin has superior monetary properties and will not accept your form of digital (or traditional) currency as money, while less convicted market participants accept both bitcoin and other currencies, the intolerant minority wins. This is exactly what is happening in the global competition for digital currency supremacy. A small minority of market participants has determined that only bitcoin is viable, rejecting the monetary properties of all other digital currencies, while the majority is willing to accept bitcoin along with the field. Because of its intransigence, the minority is slowly forcing its preference on the majority. In the world of digital currencies, diversifying by picking the field is the equivalent of letting the crowd (or the intolerant minority) choose what your future money will be, while resigning yourself to only a fraction of what you otherwise would have saved. Evaluate the trade-offs and consider the minority rule before trading in your hard-earned value for a flyer. Money doesn’t grow on trees.

Bitcoin is a remarkable cryptographic achievement, and the ability to create something that is not duplicable in the digital world has enormous value.

Views presented are expressly my own and not those of Unchained Capital or my colleagues.