A Tribute to Bold Assertions

"We propose a global and morally mandatory heuristic that anyone involved in an action which can possibly generate harm for others, even probabilistically, should be required to be exposed to some damage, regardless of context."
N.N. Taleb & C. Sandis, "The Skin in the Game Heuristic for Protection Against Tail Events"

Submit a link via GitHub

What [bitcoins] lack is their own fundamental intrinsic value. You can’t do anything with a bitcoin, other than trade it for something you want. So, intrinsically, the bitcoin itself has no value. It only has value as a medium of exchange so long as people are willing to accept it.

So, That's the End of Bitcoin Then (Forbes)

It’s difficult to see what the currency has going for it.

The Bitcoin Is Dying (Gizmodo Australia)

The lulz were abundant. But frankly, it’s time for you to go. Farewell.

Wired, Tired, Expired for 2012: From Stellar to Suck (Wired)

Then came the malware, the black market, the legal ambiguities and The Man. Today, you can't even use it to buy Facebook stock

Thus, we have an answer before us: bitcoins are fiduciary media, or more specifically token money. From a monetary standpoint, as devised and formulated by Ludwig von Mises, they are on a par with the stuff you find at Chuck E. Cheese's.

Finance and Economics Editor, The Guardian US

Confused about Bitcoin? It's 'the Harlem Shake of currency' (The Guardian US)

Of course, in a rational world, none of that will be written, except perhaps as satire. Bitcoin's crash is less of a currency crisis than an opportune moment for internet wisecracks.

So, anyone out there buying Bitcoins at ridiculously inflated prices, please recognize the risk you are taking. You will likely lose everything. 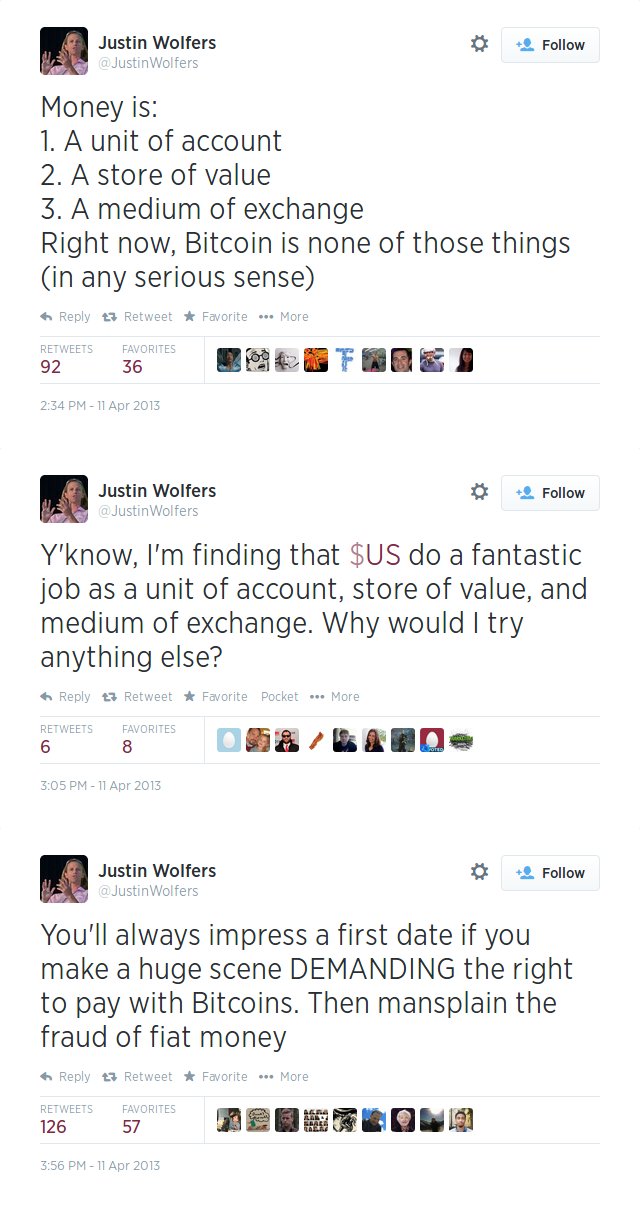 But in the end, the answer was obvious. The world’s most popular digital currency really is nothing more than an abstraction. So we’re destroying the private key used by our Bitcon wallet.

"I would be very surprised if Bitcoin is still around in 10 years," said Bremmer, the founder and CEO of Eurasia Group, the world's largest risk consulting firm. He thinks that bigger players will enter the field and improve upon Bitcoin's weaknesses.

Chairman of the Global Economics Group

Bitcoin is a Remarkable Innovation, Here's Why It Will Fail (Pymnts.com)

I think there are two realistic directions the bitcoin ecosystem could go in. First, it could just implode and disappear if governments decide that virtual currencies cause too much harm and are too hard to regulate. Long-term investments in bitcoin would then go up in smoke. Second, it could continue as a virtual currency that is only used on the dark web with exchanges that are run by people willing to break the laws. The value of bitcoin would decline to whatever the illegal sector could support; regular investors wouldn’t be able to get their value from bitcoin unless they cashed it in with someone who wanted to do bad things. 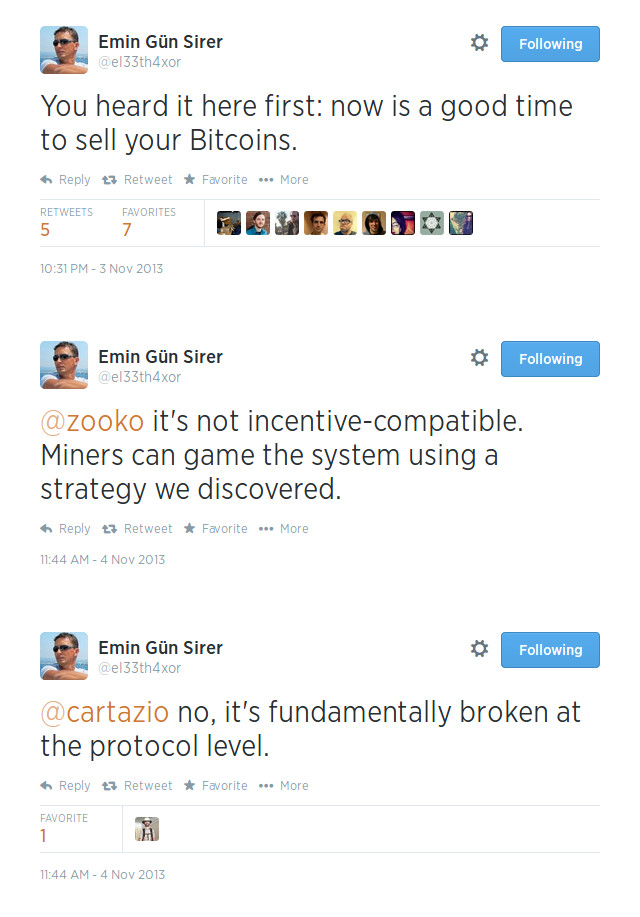 Bitcoin Is A Joke (Business Insider)

Bitcoin? Nada. There's nothing keeping it being a thing. If people lose faith in it, it's over. Bitcoin is fiat currency in the most literal sense of the word.

Bitcoin Is the Segway of Currency (The Atlantic)

In other words, Bitcoin is a Ponzi scheme libertarians use to make money off each other—because gold wasn't enough of one for them.

Bitcoins will never achieve this. It is a mania going up. It will be a mania coming down. It will not increase the division of labor, because people will recognize it as having been a Ponzi scheme, and they will not again buy it. They will not use it in exchange. Companies will not sell goods and services based on Bitcoins. Bitcoins have to have stable purchasing power if they are to serve as money, and they will never, ever achieve stable purchasing power.

Why I Haven't Changed My Mind About Bitcoin (Slate)

My primary interest in Bitcoin is that I think it's a great platform for making jokes.

Once sellers outnumber buyers, prices will eventually drop below $10, erasing all gains. This price collapse will occur by the first half of 2014.

Bitcoin represents more of the same short-sighted hypercapitalism that got us into this mess, minus the accountability.

Why I want Bitcoin to die in a fire (Charlie's Diary)

TL:DR; the current banking industry and late-period capitalism may suck, but replacing it with Bitcoin would be like swapping out a hangnail for Fournier's gangrene.

The electronic pseudocurrency has had a good run. Ideologues, speculators and scammers enjoyed the fun while it lasted. But now that the authorities are taking notice, the price has much further to fall.

You can either work doing something useful, or you can set up a botnet to mine BitCoins, or you can fork the code behind BitCoin and set up your own slightly-tweaked virtual cryptographic money network. Setting up a new, alternative network is really cheap. Thus unless BitCoin going can somehow successfully differentiate itself from the latecomers who are about to emerge, the money supply of BitCoin-like things is infinite because the cost of production of them is infinitesimal.

So far almost all of the Bitcoin discussion has been positive economics — can this actually work? And I have to say that I’m still deeply unconvinced. To be successful, money must be both a medium of exchange and a reasonably stable store of value. And it remains completely unclear why BitCoin should be a stable store of value.

Bursting the bitcoin bubble (The Globe and Mail)

As a Serious Economist, I had been happily ignoring the recent bitcoin frenzy, safe in the smug knowledge shared by all Serious Economists that the surge in bitcoin value is a bubble that will soon pop.

"It’s a terrible store of value," Mr. Dimon said in an interview with CNBC. "It could be replicated over and over."

Paul Singer: Bitcoin over gold? Are you crazy?! (CNBC)

There is no more reason to believe that bitcoin will stand the test of time than that governments will protect the value of government-created money, although bitcoin is newer and we always look at babies with hope.

In Search of a Stable Electronic Currency (The New York Times)

The Bitcoin phenomenon seems to fit the basic definition of a speculative bubble — that is, a special kind of fad, a mania for holding an asset in expectation of its appreciation.

"Stay away from it," he said, according to a transcript. "It’s a mirage basically."

Watson sounds even more negative on bitcoin. “I’ll be surprised if bitcoin is here in five years,” he has told Fortune. “The value of bitcoin isn’t the currency, but the technology. I think once the world becomes more accustomed and attuned to the platform of bitcoin, the noise will go away, and the currency will go away too.
[…]
Minor, too, predicts that bitcoin as a currency “will get destroyed.” He likens the coin’s current market cap—about $3.7 billion—to “an accounting mistake or rounding error that Bank of America makes.”

The resolution of the Bitcoin experiment (Medium)

But despite knowing that Bitcoin could fail all along, the now inescapable conclusion that it has failed still saddens me greatly. The fundamentals are broken and whatever happens to the price in the short term, the long term trend should probably be downwards. I will no longer be taking part in Bitcoin development and have sold all my coins.

R.I.P., Bitcoin. It’s time to move on. (The Washington Post)

Bitcoin did have great potential, but it is damaged beyond repair. A replacement is badly needed.

“Our view is that we’re still in the really early stages of the technology and its development,” said Allaire. “It’s highly unlikely that any of us will be using Bitcoin in five or ten years. In the same way that — how many of us use NCSA Mosaic or Netscape Navigator?”

Bitcoin was supposed to change the world. What happened? (Vox Media)

What went wrong? The Bitcoin community has been hampered by a dysfunctional culture that has grown increasingly hostile toward experimentation. That has made it difficult for the Bitcoin network to keep up with changing market demands...Bitcoin's larger problem may be that it just doesn’t solve any problems normal people have.

Bitcoin passes $1,000 but only number that matters is zero (Financial Times)

As a phenomenon bitcoin has all the attributes of a pyramid scheme, requiring a constant influx of converts to push up the price, based on the promise of its use by future converts. So the ultimate value for bitcoin will be the same as all pyramid schemes: zero.

Bitcoin Is Mania, Not a Store of Value… I Sold-Out Last Week (Mauldin Economics)

Bitcoin was supposed to be a store of value, you couldn’t mess with the formula… and now they are talking about a ‘hard fork’ changing it? Even if they don’t change the formula, the fact that they could? That’s enough to say it’s not a long-term store of value.

In my view, digital currencies are nothing but an unfounded fad (or perhaps even a pyramid scheme), based on a willingness to ascribe value to something that has little or none beyond what people will pay for it.

Bitcoin's price bubble will burst under government pressure (The Guardian)

My best guess is that in the long run, the technology will thrive, but that the price of bitcoin will collapse.

I just don't believe in this bitcoin thing. I think it's just going to implode one day. I think this is Enron in the making.

Bitcoin is the greatest scam in history (Recode)

In my opinion, [Bitcoin’s] a colossal pump-and-dump scheme, the likes of which the world has never seen.

The problem with bitcoin at the moment, despite Ohio, is just what its champions decry: It is not a government-controlled currency. And therefore, asks Merton, who is responsible for the value of our currency if tomorrow morning all the bitcoin screens go dark?

United States Secretary of the Treasury

"I can assure you I will personally not be loaded up on bitcoin" in 10 years, says Treasury Secretary Mnuchin #bitcoin pic.twitter.com/0J5acWQwRO

“It’s a pyramid scheme,” LendingTree Chief Economist Tendayi Kapfidze tells Yahoo Finance. “You only make money based on people who enter after you. It has no real utility in the world.

“They’ve been trying to create a utility for it for ten years now. It’s a solution in search of a problem and it still hasn’t found a problem to solve.”